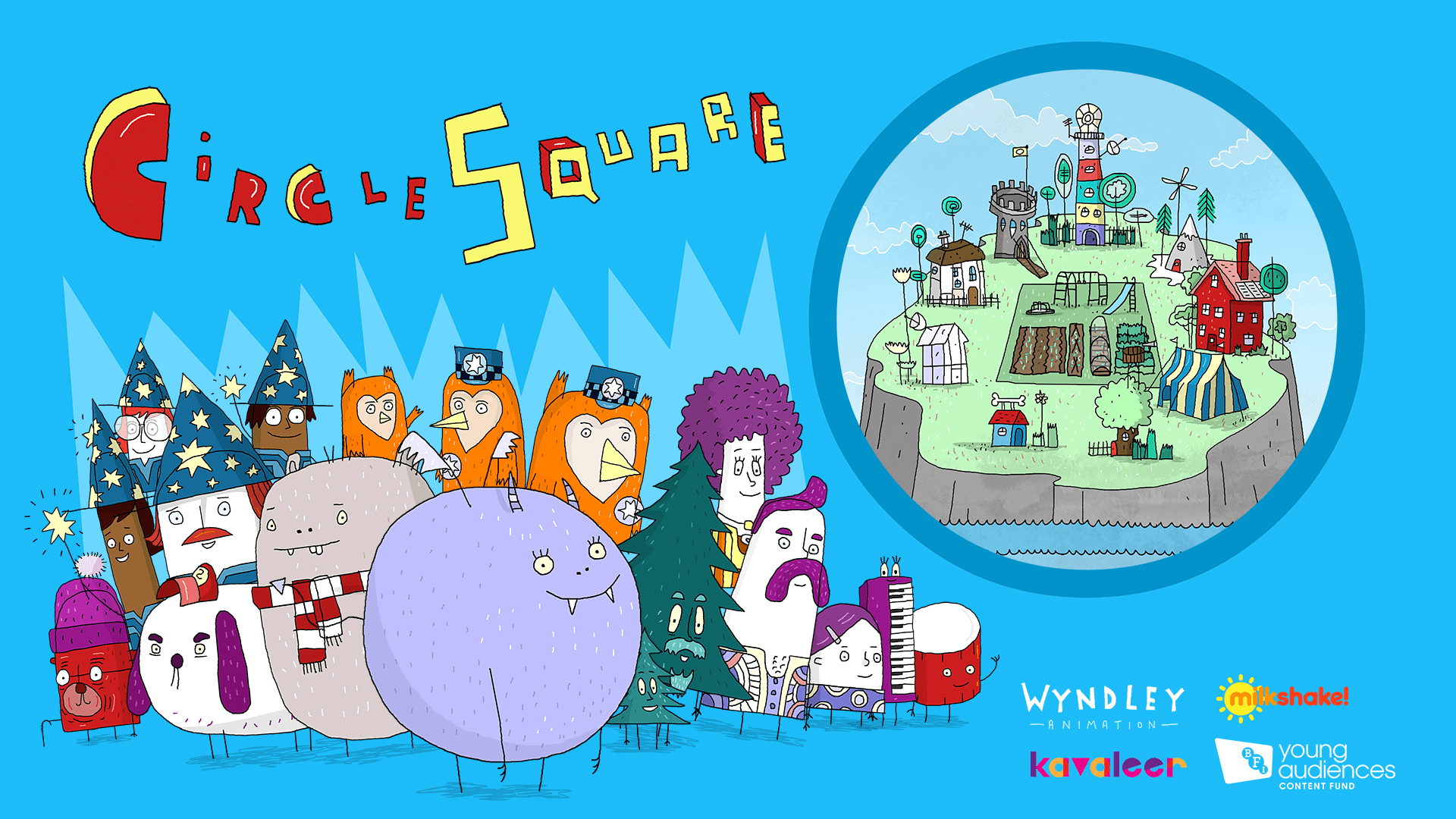 The 2D animated series was created by award-winning creative duo, The Brothers McLeod

The show is directed by Greg McLeod (365, The Inverted Peak, Random Acts), written by Myles McLeod (Noddy, Toyland Detective, Hey Duggee, Octonauts) and executive produced by Erica Darby, Helen Brunsdon, Gary Timpson and Andrew Kavanagh. It was financed with support from the UK Government funded Young Audiences Content Fund which is managed by the BFI, plus Milkshake! Channel 5 and Creative Europe.

Circle Square is an animated comedy for children 4-6 about a community of nine houses, each home to a character or family. Vanessa the Dragon, owner of the rainbow lighthouse, helps out with everyday dilemmas and each episode features a different friend in need of her help (and sometimes she needs theirs!) The households in the community include a yeti, a family of emergency service owls, a keyboard and a drum, a family of wizards, a grumpy dog, an elderly adventuring bear and a couple of walking, talking pine trees. Their companionship also extends to neighbouring islands in the archipelago of the Wyndley Isles, and to friends and family who come to visit them.

“Circle Square is a funny, friendly, warm tonic for young audiences,” said Alix Wiseman, SVP, Distribution and Acquisitions for 9 Story. “It’s got a lot of heart and a refreshingly quirky cast of diverse characters whose differences are what bind them together. Its key messages of empathy, along with the gorgeous design aesthetic created by The Brothers McLeod, will charm kids no matter who or where they are.”

Greg and Myles McLeod, Creators, Wyndley Animation, said “It’s been an absolute pleasure to bring the world of Circle Square to life. We’ve had an amazing cast and crew and they’ve made this world feel real, funny, homely, and like a place you just really want to visit. And now, we’re excited to partner with 9 Story so that children (and their families) all over the world will have the chance to meet Vanessa the dragon and her neighbours. Somebody needs Vanessa’s help today… but who will it be?”

Wild Kratts, Barney and Garfield and Friends, 9 Story Distribution International represents over 4,400 half hours of animated and live action programming, seen on some of the most respected international channels and platforms.  With facilities in Toronto, New York, Dublin and Bali, 9 Story Media Group employs more than 1,000 creative and corporate staff.

About The Brothers McLeod

The Brothers McLeod are a BAFTA winning creative team of illustrator Greg and writer Myles. They’ve been producing animation together since 2007 and have picked up five BAFTA nominations, one win and many other accolades besides. Greg’s last short animation Marfa premiered at the Sundance Film Festival and won Best British Animation at the Encounters Film Festival. Myles has written for a number of well known children’s TV shows including Hey Duggee, Octonauts, Clangers and co-developed Noddy Toyland Detective.

Kavaleer Productions is one of Ireland’s most foremost animation studios, recognized internationally as both a creator of award-winning children’s programming and a trusted co-producer and full-service studio. Now in their 20th year of business, Kavaleer’s previous credits include “Garth & Bev” (CBeebies, RTÉ Jr),“Wildernuts” (RTÉ Jr, Tiny Pop), “Kiva Can Do!” (RTÉ Jr, Gulli, Nick Jr), “Boj” (with Pesky) and two seasons of “Pablo” (with Paper Owl Films). The studio is currently engaged on Season 2 of “Boy Girl Dog Cat Mouse Cheese” (with Cloudco Entertainment & Watch Next Media) and their latest original IP “Alva’s World ”(RTÉ Jr, YLE, Sky Kids), which launches in the UK and Ireland in September.

Managed by the BFI, the Young Audiences Content Fund (YACF) supports the creation of distinctive, high-quality content for audiences up to the age of 18. The three-year pilot will support the creation of distinct, high-quality content for children and young audiences to be broadcast on free-to-access, Ofcom regulated television channels and online platforms.

Financed by UK Government as part of the Department of Digital, Culture, Media and Sport’s Contestable Fund, the YACF aims to provide new avenues for creators of original content and bring new voices to the market, and back content which entertains, informs and reflects the experiences of young people growing up across the UK today. www.bfi.org.uk/yacf

We are a cultural charity, a National Lottery distributor, and the UK’s lead organisation for film and the moving image.

Founded in 1933, the BFI is a registered charity governed by Royal Charter.

The BFI Board of Governors is chaired by Tim Richards.

Channel 5’s Milkshake! is home to some of the world’s favourite pre-school characters and was the #1 commercial channel during Milkshake! dayparts in 2020. In 2021, Milkshake! is set to grow its range of educational and engaging programming through a doubling of content investment from Channel 5, taking production from 160 to over 300 individual episodes overall, resulting in 50 new UK originated hours per year. New titles include storybook adaptation Pip and Posy, as well as high-end animations Winnie and Wilbur, Circle Square and Milo, which are backed by the BFI Young Audiences Content Fund (YACF). Support from the YACF is also enabling the return of live action drama and entertainment to Milkshake! for the first time in over five years, with titles including Go Green with the Grimwades, The World According to Grandpa, Mimi’s World and Meet the Experts. Other popular Milkshake! shows include Peppa Pig, PAW Patrol, Daisy & Ollie, Bop Box Boogie, Fireman Sam, Thomas & Friends and Milkshake! Monkey. For further information visit www.milkshake.tv.