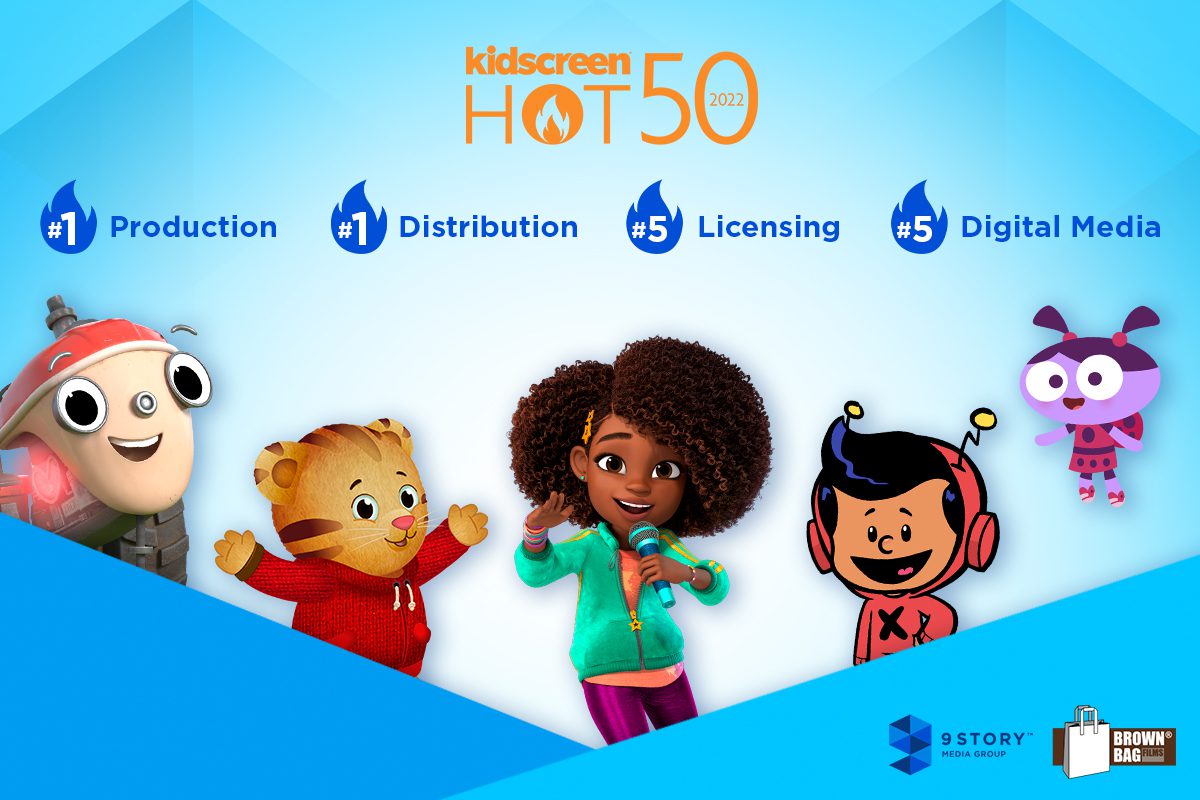 The 2022 Kidscreen Hot50 list has officially been announced, and we are so proud to share that 9 Story Media Group and Brown Bag Films have earned the #1 Spot in Production AND Distribution! In addition to these amazing spots, 9 Story also took the #5 spots in Licensing and Digital Media.

Now in its ninth year, the Hot50 rankings are determined by an industry vote that Kidscreen’s 16,500-plus print and digital subscribers are invited to take part in. We’re proud to be placed among such high-performing companies and to celebrate the superb work that our teams have produced this past year. Cathal Gaffney (9 Story COO and Brown Bag Films’ Managing Director) had this to say:

“It means a tremendous amount for all of our staff to be acknowledged in this way. Most awards ceremonies recognize individual productions, but the Kidscreen Hot50 honours studios as a whole. This acknowledges talent in every department from HR, Finance and Tech alongside our Directors, Producers and Animators. A Studio award voted by our peers, and not a jury is truly very special.” 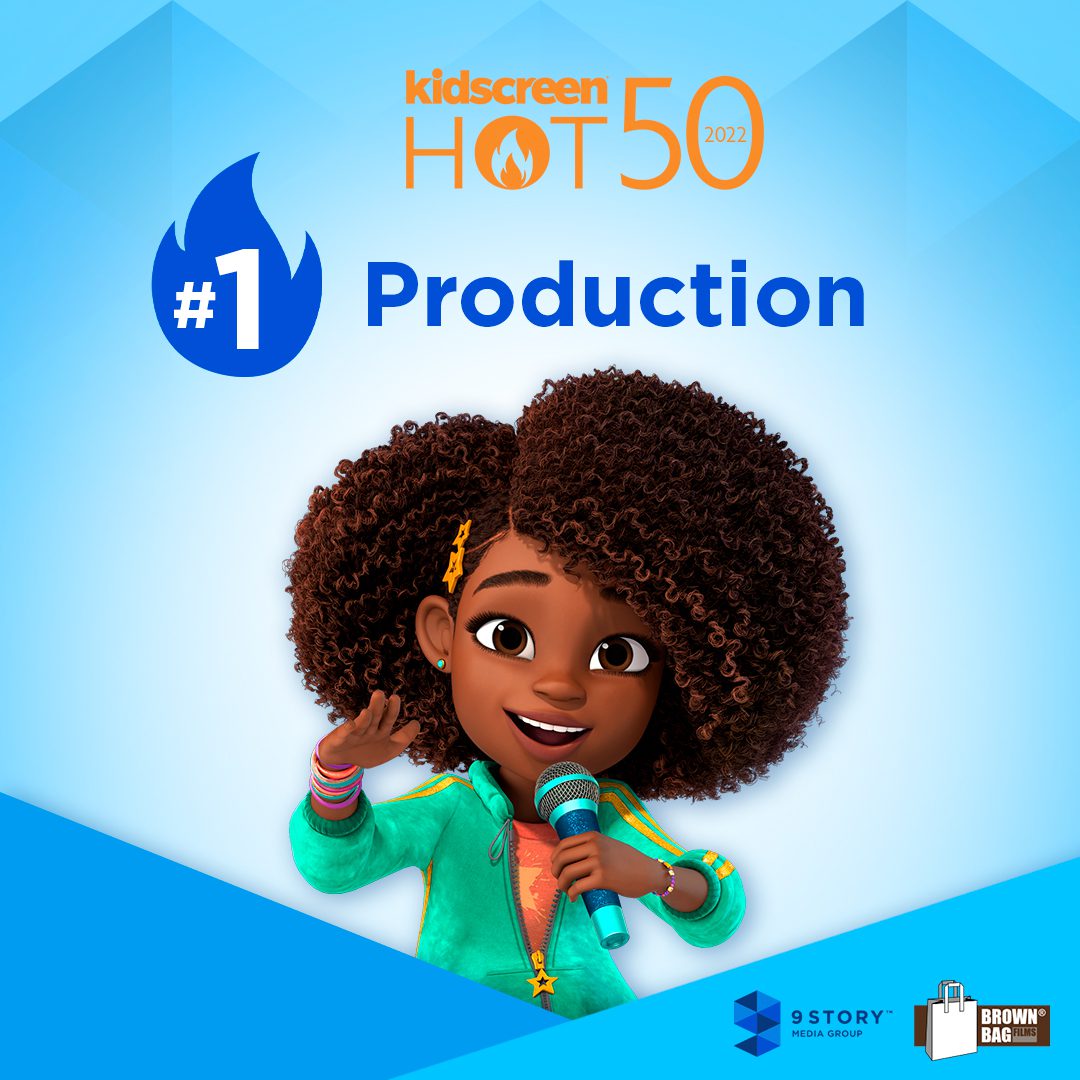 2022 has been a year of innovation and exploration for both 9 Story Media Group and our award-winning animation studio Brown Bag Films. This year, our new live-action division delivered Hello Jack! The Kindness Show to Apple TV+, and we’re now producing an adaptation of the book A Kind of Spark for CBBC. We’ve continued our dedication to diversity and inclusivity, hiring our first ever Chief Inclusion Officer, Farrell Hall, and have also made strides towards our pledge to be carbon-neutral by 2025.

This year, we are proud to say, also marks a back-to-back win in this category for 9 Story and Brown Bag Films!

“Every year brings challenges and changes that help us constantly evolve. This year, we produced our first live-action show, and we are well on the road to becoming a carbon-neutral studio. Our teams work hard to foster an environment where career progression can thrive, and having the opportunity to see our people create, develop, and direct their own shows is always exciting. Ultimately, it’s about enjoying the process of producing quality shows – we love animation, and having a great culture is the heart of it all.”

See the full list of Kidscreen Hot50 Production honorees below: 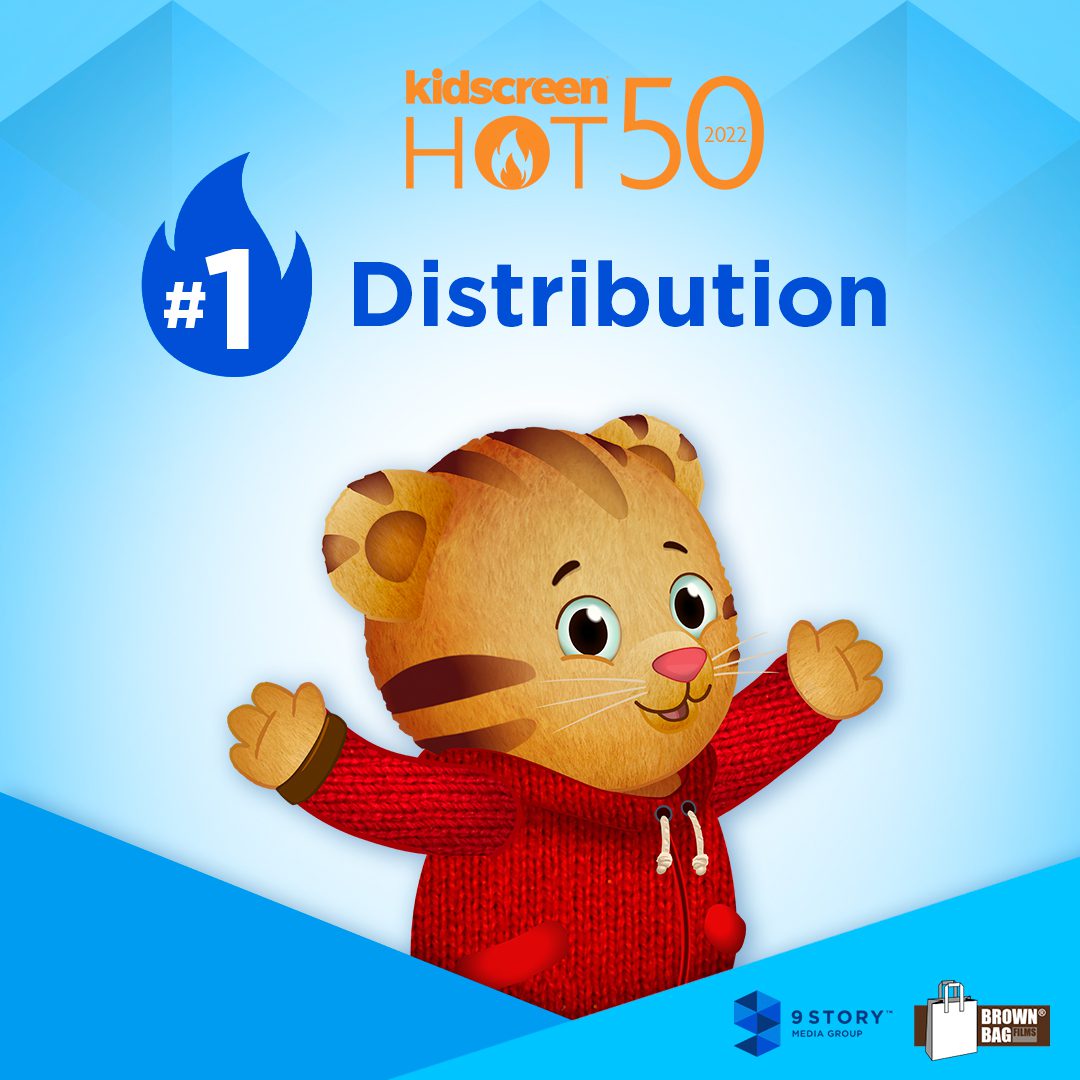 After a second-place finish last year, 9 Story Distribution International is back at the top spot! This year, the division placed a focus on neurodivergent and LGBTQ+ characters in content, casts, and crews. A Kind of Spark, an adaptation of the book by the same name by Elle McNicoll (who is also neurodivergent), is currently in production and has a cast and crew that is 50% neurodivergent.

The team signed 19 deals for Daniel Tiger’s Neighborhood this year, with a localized version for the BBC. The series now reaches 180+ territories in total. The division also grew AVOD/FAST business by 45%, with over 8,600 half-hours available across Pluto, Tubi, and Roku.

Alix Wiseman, SVP of Distribution and Acquisitions, had this to say:

“We are fortunate to have both a world class sales team and an outstanding support team across all areas of the business which enables us to be nimble, responsive and dependable.  We are very proud to have closed 9 Story’s first landmark deal with CBBC for A Kind of Spark which is not only the first show out of the gate from our new live action division but our first series where 50% of the cast and crew are neuro-divergent.  By the same token, we are delighted to have greenlit a new pre-school show (not yet announced) featuring a same sex couple and their child and modelling diverse family structures for young viewers.  Aside from this, we have made great strides over the past year with the growth of our AVOD/FAST channel business which is, again, a testament to our amazing team.”

Check out the full list of Distribution honorees below: 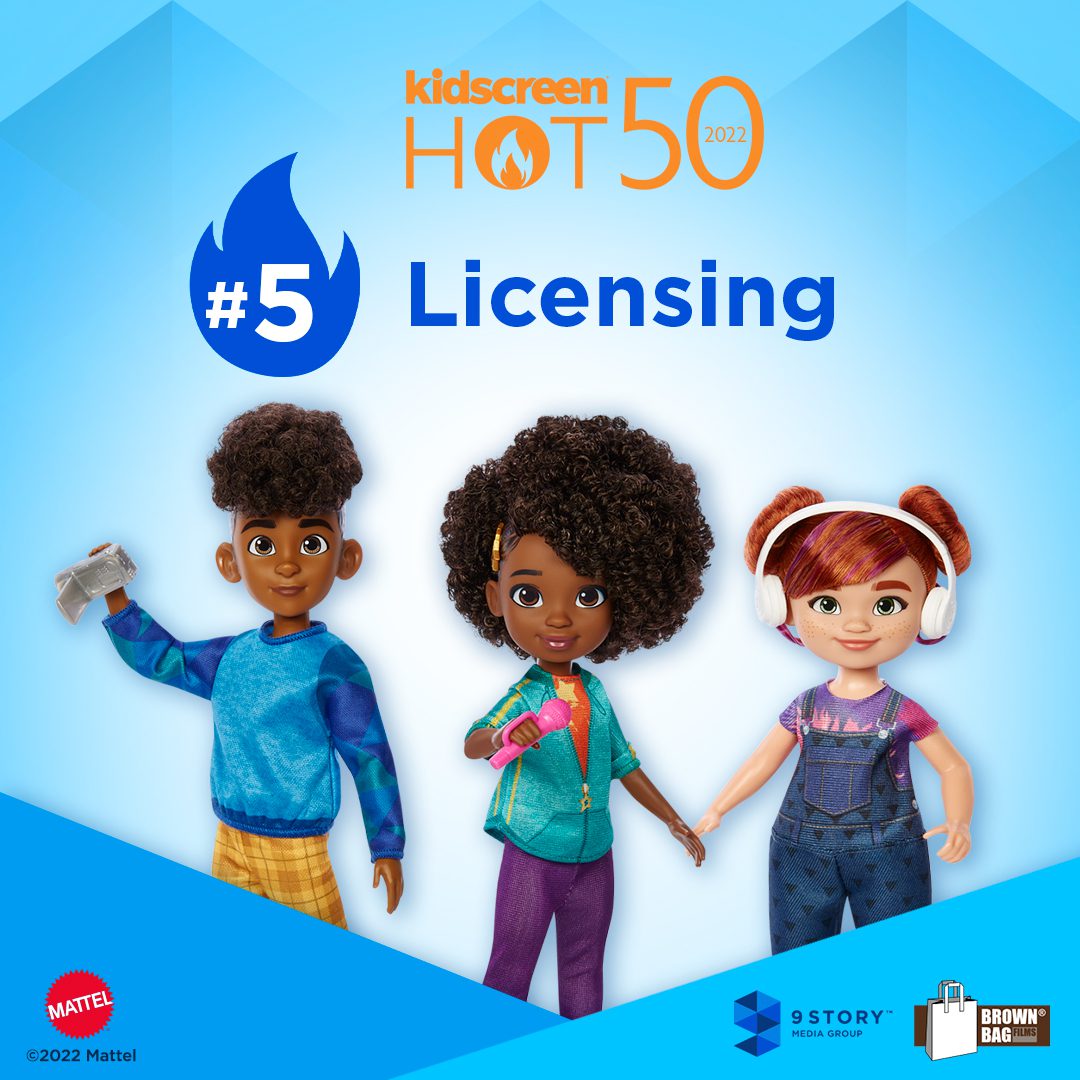 9 Story Brands placed at #5 with our first time in the Licensing category! With a focus on diversity, the Karma’s World licensing program was really able to shine this year. The Consumer Products division has signed with more than 50 licensees worldwide including Scholastic for publishing and Mattel for a line of dolls. We’ve also partnered with Black, woman-led companies like CurlyKids HairCare.

Check out the full list of Licensing honorees below: 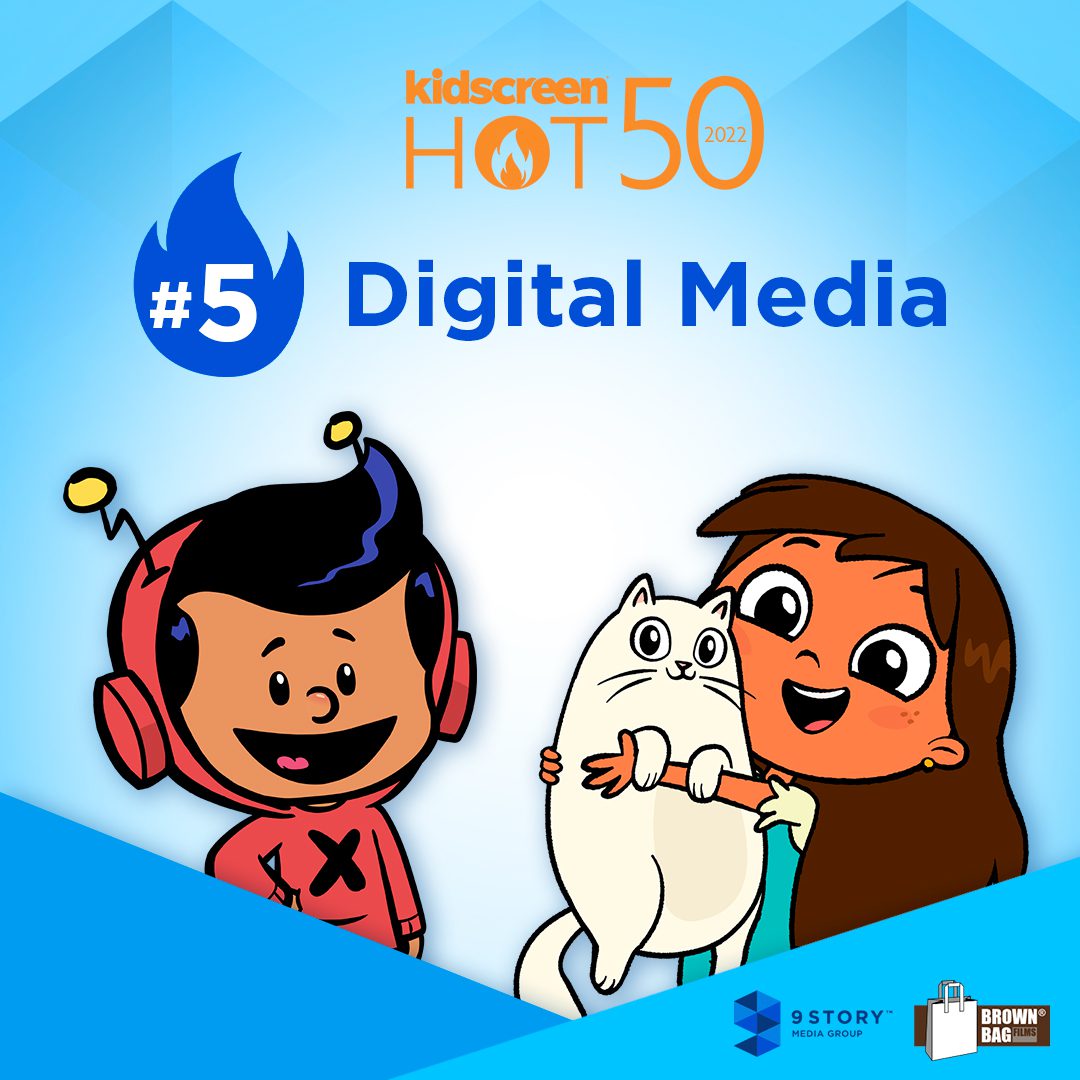 This year our Digital Media division saw some awesome wins. The Xavier Riddle’s Museum Maker educational game hit over 7 million plays on the PBS Kids website and app, and digital activations for Karma’s World saw more than 40 million impressions across social media, and the trailer for the show’s fourth season close to 7 million views on YouTube. As of today, our internally managed YouTube business operates in 16 languages and has amassed over 14 billion views.

Check out the full list of Digital Media honorees below:

We’re so happy to be in such amazing company in these categories, and to close out 2022 with this recognition for our brilliant and creative teams. Alix Wiseman, SVP of Distribution and Acquisitions said this about the 2022 list:

“For us, receiving votes from our community is the highest accolade we could wish for. We hold our clients and peers in this business in such high regard that a vote of confidence like this only makes us want to strive harder to do the best work we can.  The bar is high with the other nominees who also deserve a shout-out for their great distribution outfits and we are lucky to be in their company.”

To see the full list of Kidscreen honorees, visit kidscreen.com and check out the Kidscreen Hot50 special digital issue.

The number-one ranked companies will be honored at the 2023 Kidscreen Awards ceremony taking place during Kidscreen Summit in Miami on Tuesday, February 14.

A huge thank you again to our extraordinary crews at 9 Story and Brown Bag Films, without whom opportunities like these would not exist. It’s truly incredible to see what we can achieve together!

And finally, an enormous congratulations to all the 2022 Kidscreen Hot50 honorees!